Disney Princess Wiki
Register
Don't have an account?
Sign In
Advertisement
in: Films, Beauty and the Beast, Remakes

March 17, 2017
Beauty and the Beast is a 2017 American musical romantic fantasy film directed by Bill Condon from a screenplay written by Stephen Chbosky and Evan Spiliotopoulos, and co-produced by Walt Disney Pictures and Mandeville Films. The film is a remake of Disney's 1991 animated film of the same name, itself an adaptation of Jeanne-Marie Leprince de Beaumont's eighteenth-century fairy tale. The film features an ensemble cast that includes Emma Watson and Dan Stevens as the eponymous characters with Luke Evans, Kevin Kline, Josh Gad, Ewan McGregor, Stanley Tucci, Audra McDonald, Gugu Mbatha-Raw, Ian McKellen, and Emma Thompson in supporting roles. It was released on March 17, 2017.

“Beauty and the Beast” is the fantastic journey of Belle, a bright, beautiful, and independent young woman who is taken prisoner by a beast in his castle. Despite her fears, she befriends the castle's enchanted staff and learns to look beyond the Beast's hideous exterior and realize the kind heart and soul of the true Prince within.

In a vast castle of grandeur set in the heart of France, a handsome young prince is holding a ball to which the loveliest of women in all of the land were invited. They are all dancing away in the hope of winning the Prince's love and admiration as Madame de Garderobe sings. The party is interrupted when an old hag arrives at the castle in the hope of seeking shelter from the raging thunderstorm. All that she had to offer the Prince was a rose. However, the Prince is disgusted by her appearance and is infuriated due to the sudden disruption of the ball. He mocks her and declines the rose. The hag then transforms herself into a beautiful Enchantress, astonishing the Prince and scaring away all of his guests. The Prince begs for forgiveness, but the Enchantress has already seen that there is no love in his heart and hence transforms him into a hideous Beast. She also transforms his servants into household objects, and she removes the villagers' memories of the Prince and the castle. She reveals the rose to be an enchanted rose and says that if the Prince hasn't learned to love another and gain love in return by the time the last petal falls from it, he would be a Beast forever, and the servants would change permanently into non-living antiques.

Several years later, in the village of Villeneuve, a young bookworm and inventor named Belle is extremely bored of her village life and seeks excitement and adventure, contrary to the villagers who are very simple-minded and are quite happy where they are. They regard Belle as a very odd and "funny" girl. Belle lives with her father Maurice, a tinkerer and a music box maker. One day, Maurice and his horse, Philippe, leave for the market and asks Belle if she wants a gift when he returns home. Belle asks for a rose and for his safe return. Eventually, Gaston, who is considered as a hero by all in the village on account of his success in the battlefield proposes marriage to Belle. But Belle turns him down knowing that he is extremely arrogant and self-absorbed.

Meanwhile, Maurice and Philippe get lost in the forest while traveling to the market. While lost in the forest, they enter a part of the forest that is strangely covered in snow in June and are attacked by wolves, causing them to flee to the Beast's castle. While in the castle, Maurice experiences an eerieness and is startled by voices that seem to have no source. Though he didn't see his host, he saw that the table was served with dinner for one. Just as he is about to have dinner, Chip, the teacup, makes a sudden movement towards him and talks to him which utterly stuns Maurice. He immediately makes for the door and goes straight to Phillippe to escape the strange castle. On reaching near the gates, Maurice notices that the castle gardens have beautiful roses which reminds him of what Belle wished for. However, the Beast discovers Maurice plucking a rose from the castle's garden and detains him. Phillippe trots back to the village to find Belle. When Phillippe leads Belle to the castle, she offers to take her father's place in spite of her father's protests. The Beast accepts and sets her father free. Belle is released by the castle's footman, Lumière, who was turned into a candelabrum as a result of the Enchantress's curse. Belle also meets the other castle residents that were transformed by the curse: the castle's butler, Cogsworth, a mantel clock; Mrs. Potts, a nanny-turned-teapot; her son Chip, a teacup; court composer, Maestro Cadenza, a harpsichord; Maestro Cadenza's wife who is an opera singer, Madame de Garderobe is a wardrobe; their dog FrouFrou, a footstool; Chapeau, a valet-turned-coatrack; Cuisinier, who is the castle's chef and a stove; and Plumette, a feather duster who is a maid and Lumière's fiancé.

After the staff offers Belle a meal, she wanders into the forbidden West Wing. The temperamental Beast discovers her and frightens her into fleeing into the woods. where she encounters the wolf pack that chased Maurice earlier. The Beast rescues Belle but he gets injured in the process. He begins to develop feelings for her while she nurses his wounds. The Beast allows Belle access to his library and the two begin to develop feelings for each other. While the Beast has fallen in love with Belle, Belle is uncertain of her feelings due to her imprisonment.

Meanwhile, Maurice returns to Villeneuve but is unable to convince the others to rescue Belle. Gaston, a hunter and former soldier who is trying to woo Belle, sees rescuing Belle from the Beast as an opportunity to win her hand in marriage and agrees to help Maurice. When Maurice learns of his ulterior motive and rejects him, Gaston ties Maurice up to a tree and abandons him in the forest so that the wolves will kill him. Maurice is rescued by a beggar, Agathe, but when he returns to the village and tells the townsfolk of Gaston's crime, Gaston convinces them to send Maurice to the town's insane asylum. Using the magic mirror, Belle sees Maurice being captured and the Beast allows her to leave to save him, letting her keep the mirror to see him again. At Villeneuve, Belle rescues Maurice and proves his sanity by showing the Beast with the magic mirror. Realizing that Belle loves the Beast, Gaston locks Belle up with her father and convinces the villagers that the Beast is a man-eating monster, leading them to the castle to kill him. However, Maurice and Belle escape from confinement, and Belle rushes back to the castle to warn the Beast.

While the villagers are fended off by the servants, Gaston fights the Beast. The Beast initially is too depressed to retaliate but regains his will after seeing Belle return to the castle. He corners Gaston and spares his life before trying to reunite with Belle. Before he can do so, Gaston fatally shoots the Beast twice in the back. Gaston then falls to his death due to the stone bridge that he is standing on crumbling beneath him. The Beast dies of Gaston's gunshots as the last petal falls from the rose and the servants become completely inanimate. Belle tearfully professes her love to him and kisses his forehead. While watching the scene, Agathe reveals herself as the Enchantress and undoes the curse, returning the Prince and his servants to their true forms and restoring the castle to its former glory. The village inhabitants return to the castle with their true memories restored and reunited with their loved ones, and the Prince and Belle are married and host a ball for the kingdom at which they dance to celebrate the couple's wedding. 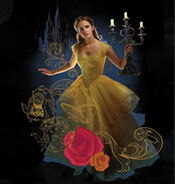