Blue
Princess Eilonwy (Eye-lon-wee) is the deuteragonist in The Black Cauldron. She is voiced by the late Susan Sheridan.

Eilonwy has a similar look to Princess Aurora. Eilonwy has long, wavy blonde hair with a black headband. She has blue eyes. Despite being a princess, she does not wear fancy clothes. She wears a gray dress with white sleeves and red collar with a lighter gray-and-white skirt and dark gray flats.

Eilonwy first appears in The Black Cauldron as she is escaping from the Horned King's Dungeon. She meets Taran and comments she hopes there are no rats in the castle. Eilonwy has a magical bauble. The Horned King kidnapped her in hopes the Babule would help him find The Black Cauldron. Eilonwy helps Taran out and enters a room of the tomb of a king, and is startled and unapproving when Taran takes the sword. However, they find it is a magic sword and helps them defeat the Horned King's men. Then they come across Fflewdder Flam and help him escape before being pursued by Creeper and more of the Horned King's men. All three of the prisoners escape and they set off.

Eilonwy shows she has excellent stitching skills when she sews Fflewdder's pants. Taran and her argue and run off. He later finds her crying and they make up. She misses Gurgi stealing from Fflewdder and immediately strikes a bond with him. They follow Henwen's tracks in hopes they will find her but get sucked into a whirlpool. They wake up and meet the Fair Folk, who promise to get Henwen back to her owner safely and to help them find the Black Cauldron and destroy it. A young fairy comments that she wants to see the pretty lady, referring to Eilonwy. They go to the witchs' house and, after difficulty, trade Taran's sword for the cauldron. The witches then reveal the cauldron can only be destroyed by sacrifice, and even then only it' evil will be killed.

They camp out for the night, and it begins to get clear she and Taran have feelings for each other. They are then captured by Creeper and more of the Horned King's men. They are forced to watch the Horned King unleash the Cauldron born before Gurgi frees them. Taran tries to jump into the Cauldron to stop it but instead, Gurgi jumps in and stops the cauldron. Taran then sends Eilonwy and Fflewdder away, trying to find Gurgi's body. Later he finds them again and they get into a boat and row to safety. Then they trade the cauldron to the Witchs for Gurgi. They then are given his body and believe he is dead. Then Gurgi comes back to life and gets them to kiss (by banging their heads together). Taran then announces they are going home. 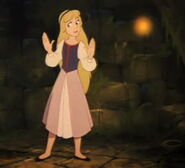 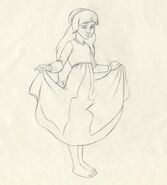 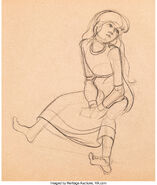 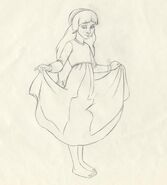 Eilonwy's bare foot can be seen. 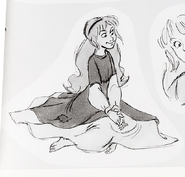