Brown
Kiara is the protagonist of the 1998 film, The Lion King II: Simba's Pride, the sequel to The Lion King. She is Simba and Nala's daughter, Mufasa, Sarabi and Sarafina's granddaughter, and thus is the princess and future queen of the Pride Lands. She later becomes Kovu's wife. She was voiced by Michelle Horn as a cub, and by Neve Campbell as a young adult.

Shortly after her birth, Kiara was presented in a magnificent and joyous ceremony to the animals gathered at Pride Rock as their future queen and ruler. Initially, she seems to have no knowledge of the Outsiders, or why they're so dangerous, implying that the events of their banishment happened either before she was born or while she was a newborn. Because she has no first-hand knowledge, she is far more accepting of them than her father is. In terms of appearance, she seems to be a cross between her two parents.

Kiara inherits her parents' curiosity and has gotten into trouble for wandering off. She is kind, wild, mischievous, playful, and a tomboy. She is also very headstrong, and she possesses a strong desire for independence and self-sufficiency. Due to her independent spirit, her relationship with her over-protective father, Simba, is loving, but strained at times, thus putting her into a conflict with him. She also displayed frequent annoyance when addressed by her title preferring to be known for who she herself is rather than who her family is. As a cub, Kiara is fairly naive, and she initially fails to understand the deeper meanings of her father's lessons, thus ignoring his advice. However, as a young adult, she is able to successfully apply what her father has taught her to help bring peace between the two feuding prides, and Simba has finally accepted that she's old enough to make her decisions in life. She also believed in reconciling the prides instead of destroying them and saw her husband's inner thoughts and goodness unlike her father, who saw only a criminal. She also showed a strong amount of charisma as she convinced both prides that they are better united than against each other. She also was incorruptible and immune to her emotions for despite her desire to be free of her queenly role, and her feelings for her mate, she put the common good of both prides before her own desires and did not give in to her emotions, unlike her father who had given in to his own fears of losing everything. She also possessed a large amount of heroism and selflessly blocked her mother in law. She also nobly tried to rescue her from falling to her death, having no desire to kill and only to save and forgive but failed. She forgave her husband and the Outsiders for their actions, having never had any intent to kill them. She also asked for no reward for her selfless actions. This proves that although she does not want to lead, she posses the traits, personality, qualities, and vision to lead, giving her the characteristics of a true queen and heroine, a true leader.

An infant Kiara appears at the beginning of The Lion King II: Simba's Pride, during her presentation to the animals. Timon and Pumbaa comment on how great it will be to relive old times with the cub, whom they believe to be a boy. They are understandably shocked when Rafiki reveals that Simba and Nala's new cub is a girl.

Kiara grows into a playful cub, and her next appearance takes place as she is going out to play. Before she can leave, Simba, who becomes seriously over-protective, begins going through an extensive list of warnings about the safety of the Pridelands. Annoyed, Kiara is able to repeat them from memory, suggesting that she has heard them many times before and grows irritated. Simba's final warning is to stay away from the Outlands, home of the villainous Outsiders, because, in his words, "You can't turn your back on them". Kiara doesn't understand why, but Simba simply tells her that she will understand one day and sends her off. She goes off but is followed by Timon and Pumbaa, whom the king has sent to babysit her. When the two get into a disagreement, Kiara is able to slip away. She wanders into the Outlands, where she meets Kovu, a young cub who is one of the Outsiders as well as Scar's chosen heir. Remembering Simba's words about Outsiders, she takes them literally and continually positions herself so that her back is not to Kovu. The two cubs are forced to work together to escape some crocodiles and become friends as a result. She plays with him for a time, but the two are forcibly separated by Simba and a gang he brought with him, and Kovu's mother Zira, a follower of Scar who was banished from the Pride Lands.

Kiara is taken home by Simba, where he scolds her for putting herself in danger, noting that as future queen, she needs to be careful. When Kiara expresses her reluctance at becoming queen, Simba explains how they are connected, saying that they are one. Once again, the concept goes over Kiara's head, and Simba simply tells her that she will understand someday. Sometime after, while at his tree, Rafiki notes to Mufasa's spirit that Kiara is growing into a great future queen, but he worries about Kovu, who is being trained by Zira to hate. Mufasa is able to communicate a plan to Rafiki, using a broken gourd as an example. If Kiara and Kovu are brought together, then the feud between the two prides can be solved. Rafiki doubts the plan at first but agrees to trust Mufasa after some convincing.

Kiara is next seen as a young adult, preparing for her first hunt. She expresses her desire to hunt on alone, and with prodding from Nala, Simba reluctantly agrees. However, he breaks his promise almost immediately and sends Timon and Pumbaa to watch her. Kiara discovers them and is angered by her father's overprotective parenting. She runs away to hunt on her own, away from her father and ends up in the midst of a wildfire set by Zira's children, her siblings-in-law, Vitani and Nuka. Kiara tries to escape, but is overcome by smoke, and is saved by Kovu. She comes to but does not recognize him at first, only realizing his identity when he asks "what are you doing"? in a reference to their first meeting.

Simba and Nala arrive at their daughter's aid, as they had seen the smoke from the fire. Kovu asks to join the pride, but Simba refuses. Rafiki appears and reveals that Kovu had saved Kiara's life. This knowledge doesn't affect Simba's decision initially, but Simba allows Kovu to join on a trial basis after both Nala and Zazu remind him that Pride Lands' law states that they owe Kovu a debt for saving Kiara. Kovu is allowed to return to Pride Rock temporarily, pending a final judgment of character by Simba. Simba distrusts Kovu and forces Kovu to sleep outside. At Pride Rock, Kovu points out that Kiara's hunting skills are rather lackluster, and that she could not survive on her own. In response, Kiara convinces Kovu to teach her to hunt. The next day, Kiara inadvertently and unknowingly interrupts Kovu's intended ambush of Simba. She and Kovu spend the day together as Kiara learns to hunt, and later the two are seen stargazing together. With some subtle prodding from Rafiki, the two begin to fall in love. Kovu later attempts to tell Kiara about his place in Zira's plot (and his reluctance to assume his role) to take over the Pride Lands but is stopped by Simba, who wishes to speak with Kovu alone.

She later sees her father, obviously injured, coming from an ambush by the Outsiders. Kiara disbelieves that Kovu was involved when Simba accuses him. She sends Zazu for help and helps her father back to Pride Rock. Kiara is later seen at Kovu's banishment, and she actively protests her father's decision but is stopped by the other lionesses. As Kovu flees Rafiki who watching the event sighs sadly feeling that Simba has completely defied his father's goals and Simba was intoxicated to notice him. When Simba forbids her to leave Pride Rock, intending to keep her away from Kovu, Kiara is infuriated. Kiara argues with her father, going so far as to remind him that he could never be like Mufasa, horrifying him.

Kiara manages to slip away and meets up with Kovu. Though Kovu considers running away to form their own pride, Kiara understands her father's words from when she was a kid upon seeing her and Kovu's reflections merge in the water. She convinces Kovu to return so that they may try to reunite their divided prides, and the two return to find that the Pridelanders and Outsiders are at war. Kiara and Kovu break up a fight between Simba and Zira who then tell them to step aside. Kiara persuades her pride and the Outsiders that their prides are no different from each other, and convinces the majority to drop the feud. However, Zira refuses to budge and attempts to attack Simba. Enraged Kiara leaps to defend him and the two lionesses fall off a cliff. Kiara is able to land on a safe ledge, and she attempts to save Zira, who is clinging to the side of the cliff. Zira refuses, and slips into the river below and is presumed dead. Simba leads Kiara back up the ledge and allows the Outsiders to return to Pride Rock. At the end of the movie, Rafiki blesses Kovu and Kiara's union, and they are seen roaring across the plains with Simba and Nala. 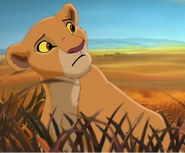