Blue
Kida Nedakh is the main female protagonist of Atlantis: The Lost Empire and Atlantis II. Young Kida is voiced by Natalie Strom and adult Kida is played by Cree Summer Francks.

The film begins with Atlantis being evacuated. Kida drops her stuffed animal and begins to go back and get it. Her mother pulls her away and tells her there is no time to get it. Then her mother is pulled into the crystal and Kida screams for her, but is caught and shielded by her father as Atlantis is forcefielded and waves crash over it. A thousand years later an adult Kida meets a group of explorers "led" by linguist and amateur archaeologist Milo Thatch who helps her discover clues to Atlantis' history, technology, language and culture. When she once again faces the crystaline Heart of Atlantis she replaces her mother as it's "host". By the end of the film Kida becomes Queen after her father's death.

At the start of the film she is riding on one of the flying vehicles going around Atlantis. She says hello to on of the repairers repairing on of the ancient buildings. 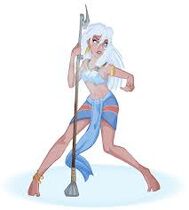 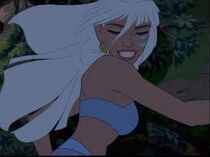