"Maybe I didn't go for my father. Maybe what I really wanted was to prove I could do things right, so when I looked in the mirror, I'd see someone worthwhile. But I was wrong. I see nothing."

Mulan (花木蘭) is the protagonist of Disney's 1998 animated feature film of the same name and its 2004 direct-to-video sequel. Mulan is the eighth official Disney Princess and first heroine in the line-up who is not actually royalty through either birth or marriage.

Mulan is a 16-year-old girl with dark brown eyes and straight, black long hair, however, its length changes. At the beginning of the original film, her hair was long, which went down to her waist. Later in the film, when she leaves to join the army; she cuts her hair with her father's sword, and ties it up in a bun, which helps her blend into the army, so that the other soldiers don't know that she's really a woman. In the 2nd film, her hair was grown, not to its original length, but it's noticeably longer than before. In promotional works, her hair is always shown as its original length, down to the waist.

During the two films, Mulan wore a range of outfits, from beautiful Hanfus (Chinese dresses) to her soldier's get up, though her most notable outfits come from the original film; in which her promotional dress comes from, which is a simple Hanfu, which consisted of either a creamy green-yellow dress, with blue overshirt, which has green sleeves and a red band around her waist. She also sports kung-fu styled soldier outfit, as well as her pink matchmaker's Hanfu and her father's armor.

Besides when she goes to the matchmaker, Mulan does not wear any makeup or anything to beautify her appearance and does not use her beauty to her advantage. Most likely not even caring about looks in that way (though nature to her is beautiful). She is often said to have had her crush on Shang for his strength and love him for his personality and sort of had a breakup. It is to be noted that Li Shang also never comments on any part of Mulan's looks or has that moment with "the girl steps into the light and angels sing." Also, it is to be noted, that they never actually say that they love each other directly to the other.

When she sleeps, she wears a light blue tank top, short blue shorts, and is barefoot. She wears a dress consisting of a green long-sleeved shirt with olive brims and both yellow skirt and inside shirt with a low cut neckline, blue wrap, red waistband, black ballet flats, but also has been seen barefoot as well. To impress the matchmaker, she had her face painted in white, red lips, black hair tied in a loose bun with a red hair ribbon, narrow crimson and pale pink Chinese skirt, pink jacket with long, flowing sleeves, aqua and plum collar, blue wrap with a red ribbon to fasten it, lavender scarf, same color shoes, jade green bead necklace, gold dangling earrings, and a special lotus flower hair pick. When she was disguised as "Ping," she has black hair tied to a bun with a teal ribbon to look like a man (when cuts her long, beautiful hair with her father's sword), and green soldier armor. In the Karate sequence, she had a Cream karate suit. In the Shan Yu battle, she wore a teal dress consisting of a poet-sleeved blouse, long olive vest with a crimson collar, crimson belt, light pink sash, same color shoes.

Mulan, aberrated, and unlike most previous female roles, is courageous and more self-reliant. She also does not fit in with the expectations of a young Chinese girl of the time; despite her natural beauty, she is clumsy, outspoken, and independent rather than graceful, obedient, silent, and demure. This is why her meeting with the matchmaker ended in chaos, that and help from a certain lucky cricket, and why the matchmaker claimed that even though she has the looks of a bride, it will never work because all she will do is dishonor her parents and her future husband. However, her courage, intelligence, and determination helped her through her adventures of defeating the Hun Army. She is also kind and warm-hearted despite her clumsiness.

Mulan is also intelligent and resourceful as she was able to quickly think of using the last rocket to cause an avalanche on the entire Hun army and lure Shan-Yu into Mushu's firing range. Her intellect is also proven by her skills in strategy during the Hun invasion. 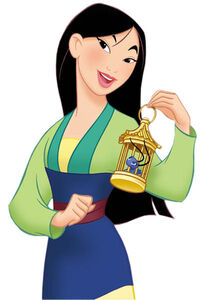 Mulan is the only child of Fa Zhou, a former war veteran, and Fa Li. Mulan is forced to go to the town Matchmaker to find her a husband, which ends in humiliating failure. Shortly after, the Chinese Emperor's counselor, Chi-Fu, arrives in her village to announce that the deadly Huns, led by Shan Yu, have invaded China and that one man in every family must serve in the war. Despite her protests, her father says that he will go in spite of his old age and old war wounds. Mulan decides to go in his place posing as a man, cutting her long hair with a sword, stealing her father's armor and riding away on her horse, Khan, so she will keep him from risking his life.

On her way to the army camp, Mulan meets Mushu, a small dragon who claims to be a guardian sent by her ancestors. He agrees to help her pass as a soldier. Though Mulan fails the army training at first, she uses her intelligence and becomes the first soldier to solve a puzzle set by Li Shang, her unit's commanding officer.

Afterward, she rapidly progresses to become one of the best soldiers in the unit. She also makes friends in Yao, Ling, and Chien Po, three fellow soldiers, though she is forced to hide her gender. Through the machinations of Mushu, the soldiers are called to the war front.

After finding that the Chinese Army, led by Shang's father General Li, has been completely destroyed by the Huns, Shang leads Mulan and the other soldiers to stop them. Despite the unit being outnumbered, Mulan is able to defeat the Huns by crushing them in an avalanche by way of a rocket. She sustains an injury from Shan-Yu, which results in her true gender is revealed. She is spared death, the punishment for a woman joining the army, as Shang's way of repaying the debt from Mulan rescuing him during the previous battle.

Mulan is left behind by the army and prepares to return home. However, she discovers that Shan-Yu and his five generals have survived and are heading towards the Imperial City. Mulan attempts to warn Shang, but she is ignored because she is a woman. However, when Shan Yu captures the Emperor, Shang, Yao, Ling, and Chien Po join her in a rescue attempt. Mulan disguises herself, Yao, Ling, and Chien Po as concubines and takes out the Hun guards, allowing Shang to reach Shan Yu and the emperor. Yao, Ling, and Chein Po escape with the Emperor, but Mulan remains behind after Shang is knocked unconscious by Shan Yu.

She reveals herself as the soldier who took down the Huns, which angers Shan Yu. While running from Shan Yu, she comes up with a plan to kill him by means of fireworks. While Mushu goes to get the fireworks, Mulan faces Shan Yu on the roof of the Emperor's palace. She disarms him with a paper fan and uses his sword to pin him to the roof, allowing Mushu to fire fireworks at Shan Yu, presumably killing him. Mulan is oppressed by Chi Fu for the final time when he arrogantly says that as a woman, she is unworthy of being called a hero and being worth anything.

Mulan is then confronted by the Emperor with her various crimes, having heard about them from Chi Fu. At the same time, he acknowledges that she saved all of China and bows to her out of respect. His gesture results in all the gathered people bowing as well. The Emperor first offers Mulan a council position then a job as consul, both of which Mulan refuses. The Emperor instead gifts her with his personal crest and Shan Yu's sword. Mulan returns home and is able to reconcile with her father. The end of the film shows Mulan inviting Shang, who had followed Mulan under the guise of returning her helmet, to dinner.

The beginning of the sequel shows Shang, now a General, proposing to Mulan, and they begin preparing for marriage. However, the Emperor tasks them both with escorting his three daughters to the neighboring kingdom of Qui Gong in an attempt to form an alliance. Should the alliance fail, the Mongols would invade China just like the Huns did. Mulan and Shang ask Yao, Ling, and Chien Po to accompany them. Shang and Mulan's relationship becomes somewhat strained during the trip, as the couple has differing views on various issues, particularly on the subject of the arranged marriages the princesses are being forced into. Meanwhile, Mushu is informed that if Mulan marries Shang, he would cease to be a guardian, instead of being returned to his former job of Gong Ringer. Mushu takes advantage of Mulan and Shang's differences and tries to break them up. However, Mulan soon discovers Mushu's plans and tries to reconcile with Shang.

Before she can talk to Shang, bandits attack the group. Shang and Mulan are able to save the princesses but are left hanging from a broken bridge. Shang chooses to sacrifice himself, as the bridge can only support one. Mulan and the princesses continue towards Qui Gong. Seeing that the princesses have fallen in love with Yao, Ling, and Chien Po, and believing that Shang is dead, Mulan prepares to offer herself as a bride in their places. However, Shang is revealed to have survived his fall and travels to stop her. Mushu is able to fix things by masquerading as the Golden Dragon of Unity and forces the King to stop the wedding. The princesses are released from their vows and Shang and Mulan are married.

At the end of the film, it is revealed that Mulan has told Shang about Mushu and that Shang has combined the family temples, allowing Mushu to remain a guardian.

Mulan made a guest appearance in the Sofia the First episode "Princesses to the Rescue!."

While singing a song called "Stronger Than You Know," she teaches Sofia, Amber, and Jun that they are stronger than they know by showing them how to cross over the moving warrior statues with vines and tells them to go on to save their beloved fathers and brothers without her. Just like Ariel in "The Floating Palace," she does not appear in her redesign outfit. Instead, she wears her much shorter shoulder-length hair, her battle armor along with her helmet, and a new golden sword.

In "Ask Von Drake", Mulan was seen with Mushu and Cri-Kee during the headcount of all the Disney character guests.

In "Salute to Sports", Mulan briefly appeared on stage with Donald to give a martial arts demonstration.

Mulan: Rise of the Warrior

Mulan saved Finn and Charlene from Shan Yu and helped them escape Epcot. She uses a bow although in the movies she uses a sword.

Disney Princess Wiki has a collection of images and media related to Mulan.