Once Upon a Time

The series takes place in the fictional seaside town of Storybrooke, Maine, in which the residents are actually characters from various fairy tales that were transported to the "real world" town and robbed of their real memories by the Evil Queen, Regina (Lana Parrilla), using a powerful curse obtained from Rumplestiltskin (Robert Carlyle). The town's only hope lies with a bail bondswoman, Emma Swan (Jennifer Morrison), the daughter of Snow White (Ginnifer Goodwin) and Prince Charming (Josh Dallas), who was transported from the fairy tale world before she could be cursed. As such, she is the only person who can break the curse and restore the characters' lost memories, aided by her son, Henry (Jared S. Gilmore), with whom she has recently reunited (after giving him up for adoption upon his birth), and his book of fairy tales that holds the key to ending the curse. Henry is also the adopted son of Regina (who is the mayor of Storybrooke), providing a source of conflict between the two women.

Each episode focuses on a character back story. One segment details the character's past life that, when serialized, adds a piece to the puzzle about the primary characters and their connection to the events that preceded the curse and its consequences. The other, set in the present day, follows a similar pattern with a different outcome but also offers similar insights.

The Evil Queen interrupts the wedding of Snow White and Prince Charming to announce that she will cast a curse on everyone and take away all their love so that she is the only one with a happy ending. Many of the fairy tale characters are transported to Storybrooke where most of them have been stripped of their original memories and identities as fairy tale characters.

ABC renewed the series for a second season, which premiered on September 30, 2012. Despite Emma breaking the curse, which brings everyone's memories back, they are not immediately returned to the fairy tale world. With the introduction of magic by Rumplestiltskin/Mr. Gold into Storybrooke, the fates of the two worlds become intertwined, while a portion of the fairy tale world that was relatively spared by the curse is revealed.

On April 20, 2014, it was confirmed that former Once Upon a Time in Wonderland star Michael Socha would be a series regular as his character Will Scarlet/Knave of Hearts. The final minutes of the third season finale revealed that Elsa will appear in some capacity. Kristoff and Anna from the 2013 film Frozen will also be introduced in Season 4, along with a new main antagonist, portrayed by Elizabeth Mitchell. The second half of the season will see the return of Kristin Bauer van Straten as Maleficent in a recurring capacity for a "major arc". 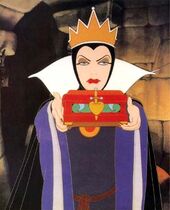 Once Upon A Time
Community content is available under CC-BY-SA unless otherwise noted.
Advertisement