Sofia the First is a 3D computer-animated television series that officially premiered with its first half-hour episode on January 11, 2013. The series pilot made its debut on Disney Channel on November 18, 2012 with a one-hour special. The series stars Ariel Winter as the voice of the titular character, who is a young girl on the verge of becoming a proper, royal princess.

It introduces Sofia, a little girl with a commoner’s background until her mother (voiced by Sara Ramirez) marries King Roland II and suddenly she becomes royalty.

The series follows the adventures of Sofia, a young girl who becomes a princess overnight after her mother marries the king. Sofia tries her best to adapt to her new life being a princess and has her stepbrother and sister James and Amber to help her along with the headmistresses of the Royal Preparitory Academy Flora, Fauna and Merryweather, the Three Good Fairies from Disney’s classic Sleeping Beauty and, when Sofia is at her darkest hours, classic Disney Princesses Cinderella, Jasmine, Belle, Ariel, Aurora, Snow White, Mulan, Tiana and Rapunzel are there for her.

Sofia learns that looking like a princess isn't all that hard, but behaving like one must come from the heart. The stories focus on the idea that what makes a real princess is what's on the inside. The show highlights character qualities such as kindness, courage, generosity, loyalty, honesty and grace. Subjects such as sincerity and forgiveness are heavily focused on. She has the magical and incredibly powerful Amulet of Avalor that allows her to talk with animals and turn into a mermaid. However her amulet is coveted by the sorcerer Cedric, who desires its tremendous magical power to take over the kingdom of Enchancia.

Sofia the First: Once Upon a Princess

Main article: Sofia the First: Once Upon a Princess 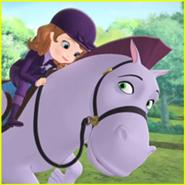 Add a photo to this gallery

Retrieved from "https://disneyprincess.fandom.com/wiki/Sofia_the_First?oldid=25144"
Community content is available under CC-BY-SA unless otherwise noted.