Blue
Star Butterfly is the protagonist of Disney animated television series, Star vs the Forces of Evil. She is voiced by Eden Sher.

Star Butterfly is a girl with blond hair and blue eyes with two hearts on her cheeks. She usually wears a red devil headband and has worn several different outfits during the animation. For example, she wears her most iconic princess outfit, including a elegant blue dress with puffy light blue sleeves with dark blue strings around them, a medium blue vest with a darker blue trim and gold buttons, a blue puffy skirt with light blue ornaments and two strings with several hearts, a gold tiara, white tight socks and a pair of very shiny black shoes with light blue puffs on the toes.

Star is energetic, friendly and a little rebellious. She loves having fun, and she usually has an optimistic outlook on life. She loves to help others and whenever she sees that someone is upset, she does her best to cheer them up.

Sometimes she can be stubborn and pessimistic. When she has to deal with serious things like monsters trying to get her wand she still has her fun personality but sometimes she can act in a more serious and mature way.

Star is shown as a lively and rebellious girl who, after not knowing how to control the powers of her wand, goes on exchanges on Earth and begins to live with Marco Diaz who becomes her partner and future boyfriend. She until the end of the first season proved to be a little stubborn and a little childish but when Marco is kidnapped by Toffee she starts to act in a more serious way to save his friend. Then at the beginning of the second season she continues to be childish, rebellious and fun but starts to soften. In the third season it remains a little childish but more mature and in the fourth season it becomes totally mature and not very childish but remains rebellious. 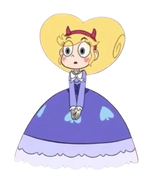