"My daddy never did get what he wanted. But he had what he needed. He had love! He never lost sight of what was really important. And neither will I!" - Tiana

The Princess and the Frog 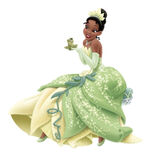 Tiana is a 19-year-old African American waitress with wavy, black hair and light brown eyes. She is mainly pictured with her dress from the end of the movie, a green and light yellow one, with pale green leaves.

The Princess and the Frog

The movie begins with Tiana as a young girl sitting with her lovely best friend Charlotte as her mother Eudora reads them the Frog Prince. Tiana, unlike Charlotte, is disgusted with kissing a frog. Then Charlotte sticks a green sock (that looks like a frog's head) on her kitten in Tiana's face, telling her to kiss it. Tiana's mother rebukes Charlotte and the kitten jumps on the ceiling. Charlotte's father, simply known as Big Daddy, arrives and Charlotte begs him to have Eudora make her a new dress. After agreeing, Eudora takes Tiana and leaves. Tiana arrives at her house and greets her father, who helps her make a pot of gumbo. They then share it with the neighbors. Later that night, James tucks Tiana into bed and it is revealed they share the same dream; to own a restaurant. Tiana sees the "wishing star" out her window and says that Charlotte told her that if you wish on it, your wish will come true. James laughs and tells her that the star can only take her halfway: she has to work the other half. He and Eudora leave, and Tiana wishes hard for the restaurant. She looks over and sees a frog on her windowsill. It croaks and Tiana screams and runs out of her room.

Years later, Tiana, as a grown woman, walks in her room and collapses on her bed. Her alarm immediately rings, and she kicks it. She opens her wardrobe and changes her outfit. She goes over to her restaurant and starts work. Big Daddy sits at one of Tiana's tables, when, halfway through her shift, Charlotte barges in and tells Tiana that Big Daddy (king of the Mardi Gras) had set her up a date with the Prince Naveen at the Mardi Gras ball. She hires Tiana to bake her 500 beignets for the ball to impress the prince. Tiana now had enough money to buy an old windmill, which she will use to make her restaurant. She shows her mother and has vivid dreams for it. Unfortunately, while at the ball she finds out someone bid higher on the windmill and if she can't pay them back by the next Wednesday she would lose the windmill. She trips on a table and gets messy. Charlotte takes her up to her room to change. Charlotte talks on and on about the Prince than compliments Tiana on her new outfit. Charlotte leaves when Prince Naveen (Lawrence in disguise) arrives and Tiana makes a wish on the wishing star, which she hasn't done since she was young, that she might get her restaurant. She spots a frog and sarcastically asks him if he wants a kiss. He replies, "Kissing would be nice, yes?" and she screams and runs back into Charlotte's room and throws stuff at the frog. He reveals what happened to him, vaguely, and then tells her to kiss him. After some persuasion, she agrees and kisses him. However, instead of turning him into a human, she turns into a frog.

Disney Princess Wiki has a collection of images and media related to Tiana.